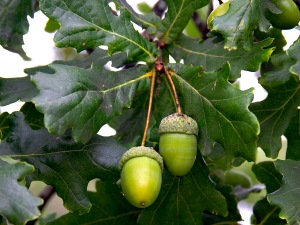 This fall appears to be a good year for acorns, and my pear tree produced such a heavy crop that there was a lot of limb breakage.  Fruit and nut production varies from year to year, and the reasons are many

Sometimes when a tree is in declining health or enduring some form of stress, it produces a lot of fruit in hopes of reproducing and carrying on the line in case it dies, referred a stress crop.  Back in the old days farmers would go out and beat the trunks of apple trees with a heavy stick to stress the tree and make it produce.   Another cause of heavy fruiting is favorable weather creating an excellent growing year with enhanced photosynthesis and stored food production one year, providing the resources to have a great reproductive year the next growing season.  Good fruit seasons are helped by the absences of damaging frosts in the spring.  Poor fruiting years can be due to poor growing conditions for flower bud development, such as drought the previous summer.  Sometimes a great reproductive year depletes reserves for producing flower buds and fruit the next season.

Sometimes the reason for feast and famine years is hormonal.  Some trees are biennial or alternate bearers, having high yields one year and little the next.  A heavy fruit load one year pushes the next year’s buds towards becoming leaves; whereas a year of heavy leaves pushes the following year’s buds to favor becoming flowers.  The reason is a necessary balancing act.  An ultimate goal of living things is to pass on its genes to future generations.  Fruit production is an energy drain but is necessary to produce seeds.   Leaves produce food energy but can’t pass on genes, so a compromise is needed. Orchard growers can manipulate trees with alternate tendencies by thinning out fruit during heavy years to allow the tree to put more energy into the fruit that remains and allow the tree to shift some energy to flower buds for next year.  Fruit thinning works well for apples, plums, pears, and peaches.

Hunters and other wildlife enthusiasts are always on the lookout for good “mast years” when acorns, hickory and other nut trees produce good food crops.  Mast years occur every 4-7 years, but their timing is a mystery.  Scientists are unsure if it’s caused by a tree’s biological clock or a response to environmental cues.  They do know that massive seed formation seems to occur on a year prior to favorable growing conditions and when the tree has room for new growth.

I’m not sure what is causing oaks and some fruit to produce a heavy crop this year.  It’s been a terribly dry year, so perhaps the stress crop phenomenon is coming into play.

This entry was posted in Nature, Plants, Trees. Bookmark the permalink.