The Old Custom of Shiveree 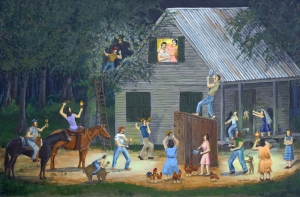 I consider myself fortunate to have witnessed a now a forgotten custom called Shiveree.  When I was around 5 years old and living at East End in Middlesboro, a couple got married a few houses down from us.  A group of neighbors conspired to sneak up on the couples’ house in the night, and on signal scream, yell, and bang pots and pans together to create a ruckus.  The bewildered couple appeared at the door, and the husband was promptly picked up and placed on a heavy plank and paraded about on men’s shoulders.  The bride was placed in a wheelbarrow and given a similar ride.  Afterwards the crowd settled down and congratulated the newlyweds.  I must say that as a young boy I was most impressed with how crazy adults could be, and thoroughly enjoyed the excitement.

Shiveree is defined as “a loud and purposely frightening community party, forced upon newlyweds a short time after their wedding.”  In a typical Shiveree, family and friends quietly gather after midnight, brandishing shotguns, pots, pans, and various other noise-making devices. On cue the crowd begins making as much noise as possible, with the sole purpose of scaring the lovebirds out of a peaceful sleep.  Once this is accomplished, the newlyweds are obliged to come outside and party with the crowd.  According to one source this is an old Irish custom.  It also may have originated in France and brought over by Fur Traders.  The name was probably derived from the French word “charivarie”, which means “a mock serenade for newlyweds. “

Shiveree was a common celebration during the Pioneer days of our area, and continued into the early 1900s.  There is a family story that my grandfather Tommy Roark attended a Shiveree when he was young, where he and several others shot pistols into the air to make noise.  Someone was accidentally shot, but no one knew whose gun it came from.  Today the word is still used to refer to any sort of gathering, and a remnant of the custom still hangs on through the tradition of tying cans to the newlywed’s car to create the loud clanking as they drive off.

This entry was posted in Holiday, Home. Bookmark the permalink.