Return of the Chestnut? 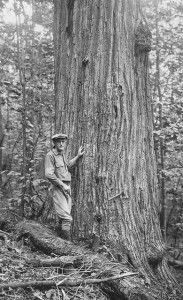 The American chestnut was once the grandest tree in the Appalachian forest, with diameters 5-8 feet wide and broad spreading crowns over 100 feet tall.  It grew from Maine to Georgia, covering 200 million acres. In our area one tree in four was a chestnut.  In the spring the mountains would be so white with Chestnut blooms that it looked like it had snowed, and in the fall would be golden with the leaf change.  It was valued for its wood, which sawed and split easily, had a beautiful finish, and was decay resistant.  For wildlife it was the staff of life, producing three times as many nuts as oaks, and produced a more dependable crop year to year. It was the king of the forest, but in the early 1900s fell to an imported blight disease that virtually wiped it out.

You can still find large weathered chestnut stumps in the forest, some showing its impressive size. The wood of the stumps reminds me of bleached barn wood.   It’s also fairly easy to find chestnut sprouts that try to grow back from old rootstock, and occasionally some will grow large enough to produce nuts. But eventually they also fall to the blight, which can be identified by ugly cankers on the bark that may be splotched with orange patches.

The nuts, if you’re lucky enough to find them, look like smaller versions of Chinese chestnut, with a prickly husk that contains one or two brown nuts.  Turkey and squirrel were especially dependent on the nuts, and the population of both plummeted after the blight came through.  Chestnuts were a high-energy food with twice the protein of oak acorns.   They were also high in fat, which was important for getting many wildlife species (especially black bear) through the winter.  Humans enjoyed the nuts as well, and farmers gathered them as a cash crop to sell to city folk, who enjoy them roasted.  Hogs were turned loose in the woods to fatten up on chestnuts with no feed costs.

It would be great to get this tree back to its former prominence, and work is afoot to get it there. For decades a breeding program has been ongoing to cross the American chestnut with its Chinese cousin that is resistant to the blight.  They then crossed that hybrid with a pure American tree again and again (a process called back crossing), hoping to eventually get a tree that has all the desirable properties of American chestnut that is also immune to the blight.  It’s been a very slow process but right now they have a hybrid that is 15/16st American chestnut that may be the one, so it’s being planted in forests across several states to see how it does.  Success is still uncertain, but it’s worth a shot to get back such a noble and useful tree.

If you’re interested in learning more about work being done to bring back American chestnut, or to donate to the cause, contact the American Chestnut Foundation, 50 North Merrimon Avenue, Suite 115, Asheville, NC 28804.  Their website is www.acf.org.