Fish Bait from a Tree 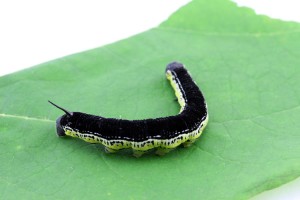 If you fish and have room in your landscape for a tree, the catalpa may be for you.  It supports a worm that is superb bait for bluegill and catfish. The common name used around here is Catawba tree, and has also been called Indian bean and cigar tree.   There is a northern and southern species of the tree, and the more common one around here is  the northern catalpa (Catalpa  speciosa).

Catalpa is easy to identify, with large 6-12 inches long, heart shaped leaves.  Showy white flower clusters bloom in early June, and look like trumpets with crinkly edges.  The fruit is a long green bean looking capsule, 8 to 20 inches long.  The bark is thick, furrowed, and has a light brown color.

The caterpillar that feed on catalpa leaves is the “catawba worm”.  It is the larva of the sphinx moth, and is easy to identify by its black and yellow striped body.  It has a single spine-like horn on the tail end, which is not a stinger as some think.  It is related to the tobacco hornworm.

The female sphinx moth lays eggs only on catalpa trees, which hatch in early June.  The larvae feed on leaves until they get too fat to hold on, then drop the ground and burrow in.  Upon metamorphosis, the buried worms emerge as adult moths.

The worms don’t attack every tree, but when they do the damage is obvious.  The entire leaf may be eaten, but often the leaves are skeletonized, leaving the veins intact.  Look for the worms on the underside of leaves.  Though a large worm population can denude the entire tree, it will quickly grow more leaves.  There are often two hatching of catawba worms during a long warm season.

When the worms are nice and fat they can be picked off and used fresh for fish bait, storing them in a cricket cage along with a few catalpa leaves.  For longer storage, pack them in cornmeal and store in the refrigerator for several weeks.  For even longer keeping, put them in the freezer.  Using them is simply a matter of threading them on a hook.  Some fishermen turn them inside out, claiming the juicy insides attract fish better.

The catalpa tree makes a nice landscape plant, growing quite large with a broad, spreading canopy.  The flowers are very showy in the early summer. Seedlings can be ordered from a nursery, or you can grow your own from seed, which germinate readily.