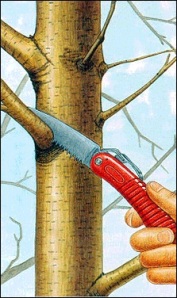 Winter is a good time to prune most trees because they are dormant and their leaves are off, making it easier to see how the branches are laid out.  Here are some general guidelines to help keep your trees healthier and more attractive.

Trees that should not be pruned in late winter are free bleeding varieties that include maple, birch, walnut, and poplar.  These should be pruned in early winter before February.  Showy spring blooming trees should not be pruned until after blooming is complete. One of the better pruning guides I’ve found on line is at:  http://www.na.fs.fed.us/spfo/pubs/howtos/ht_prune/addinfo.htm

This entry was posted in Nature, Plants, Trees, Weather. Bookmark the permalink.